MERRILL PASSES 25 CARS TO WIN TA2 ROUND 3 AT LAGUNA 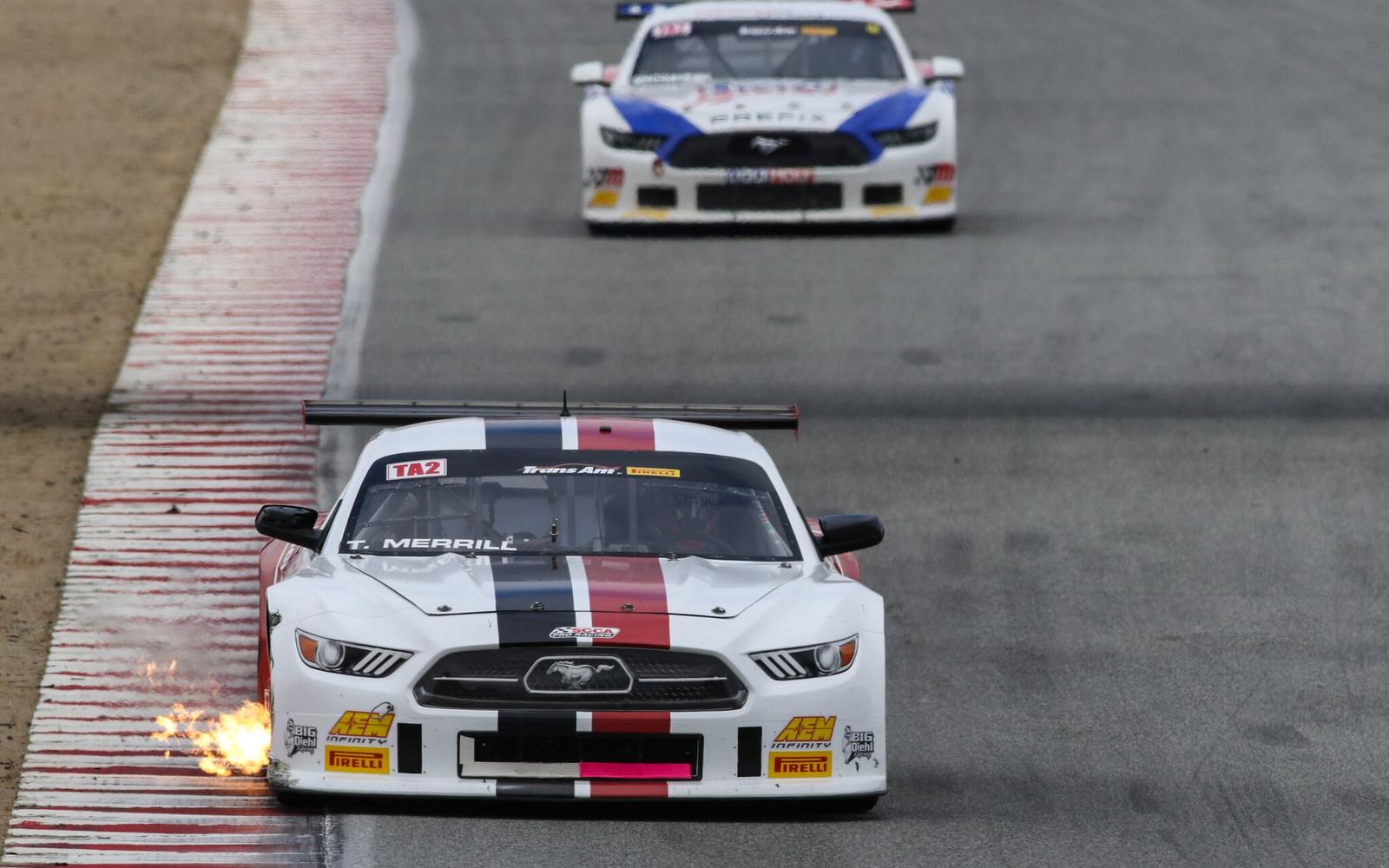 MONTEREY, Calif. (5 May, 2019) –The TA2 powered by AEM Round 3 lived up to the Trans Am SpeedFest weekend name at WeatherTech Raceway Laguna Seca. Hometown favorite Thomas Merrill drove from a near last place start to finish the race first in Sunday’s Trans Am Series presented by Pirelli weekend 70-minute finale.


Dillon Machavern in the No. 77 Liqui-Moly/Prefix Ford Mustang claimed second with his Stevens-Miller Racing teammate Marc Miller taking third in the No. 40 Prefix Dodge Challenger.


“Winning at home is the best thing I can possibly imagine,” said Salinas, California native Merrill. “I’ve raced here a lot in other pro series and had a lot of poor luck racing at my home track. This is the first one I’ve had success at, it’s incredible. Making noise at Laguna is my favorite thing to do and I hope all of Salinas heard it. I can’t say enough about Big Diehl Racing, Skip Barber Racing we are the best team in the paddock and today really proved that.”


After setting the third fastest lap in practice on Saturday, Merrill didn’t turn laps in qualifying due to a mechanical issue that started on pre-grid. Without a qualifying time, Merrill in the No. 81 Big Diehl Racing Ford Mustang was forced to start second to last in 26th position.


As the green flag dropped, Merrill cut through traffic making up several positions by the first turn and at the end of the first lap shot into the top-10. Shortly after the start, a full course caution came out, grouping up the field. On the restart, Merrill continued to whip his Ford around the 11-turn, 2.38-mile track, entering into the top-five before another yellow called out the safety car. Again, Merrill used the restart to his advantage.


“To win the race we really needed yellows to make quick passes and to save on tires,” Merrill continued. “We were fortunate to have  a couple yellows early on. Pair that with the good luck in traffic, really helped get us up front.”


Merrill didn’t execute a back of the field to the front run by playing it safe. Picking off drivers one by one, Merrill focused his attack on second-place Machavern.  Climbing up the Corkscrew, Merrill darted to the inside of the Stevens-Miller Racing pilot before the Hairpin for a quick overtake for second. Miller, who lead the entire race at that point, jockeyed for position against Merrill before conceding to the rocket ship Mustang. Losing momentum as his tires started to fade, Miller fell to third behind his teammate Machavern.


“I was really happy to give Stevens-Miller their first pole,” said Miller. “We didn’t have the luck with traffic that Thomas had. My tires started wear, I picked up some rock debris and my brakes started to go at the end which made it a little hard to keep up with these guys. I want to thank all my team that worked late at night making my car fast. Even though I didn’t have the best brakes at the end, we were solid on the brakes all week until then. I am really happy with everything.”


“Today was great competing with the full field of National competitors,” said McAllister. “I wouldn’t be where I was without help from Team Shockwave and Team TFB.   It’s a great group of teams and that makes the series that much more enjoyable. To come away with a win at such a technical track is truly amazing.”


The Trans Am presented by Pirelli returns to action in just three weeks for the Memorial Day Motorsports Festival at Lime Rock Park May 24-27. For result updates, visit GoTransAm.com.