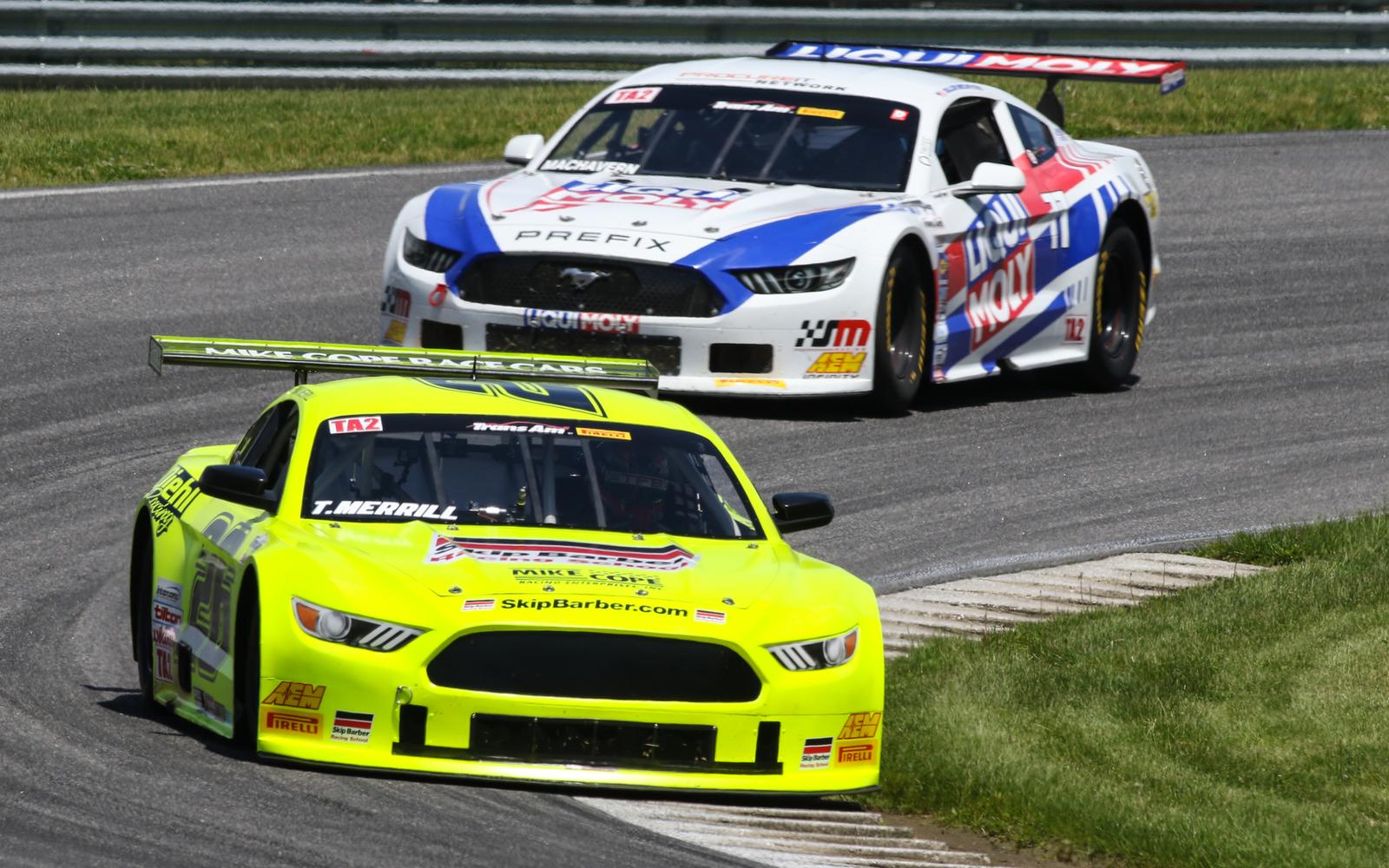 Lakeville, Conn.  (25 May, 2019) –There were multiple events and media activities to celebrate the 55 years of Mustangs competing at Lime Rock Park in the run up to Saturday’s TA2 powered by AEM race. And after the race, the celebrations continued as it was the Mustangs that dominated Saturday’s Trans Am Series presented by Pirelli Memorial Day Classic.

Racing the No. 26 Mike Cope Race Cars Big Diehl Skip Barber Ford Mustang, Thomas Merrill  kept Dillon Machavern’s No. 77 Liqui-Moly Prefix Ford Mustang in his mirrors for the entire 100-mile feature to take the checkered. Driving flag to flag to his second TA2 victory, Merrill is the first driver to win back-to-back on different coasts this season.
Machavern finished second with Scott Lagasse Jr. in the No. 92 SLR/Fields Racing/M1Racecars Chevrolet Camaro rounding out the podium.

“The car was a rocket ship all weekend,” said Merrill, who also snatched pole position in the final seconds of qualifying from Machavern. “I got lucky with the traffic and used it to my advantage to keep Dillion behind me. Dillion is a respectable driver. There were several opportunities where he could have bumped me to take P1 but he kept it clean and I appreciate that. Mike Cope Racing really put together a great car at the last minute for me and I couldn’t be happier with the outcome.”

Starting on pole, Merrill pulled away from the pack, leading Machavern by more than three seconds after five laps. But, Merrill’s speed started to fade late in the race, allowing Machavern to challenge the front-runner. A late yellow regroupe the field after the No. 12 car experienced mechanical issues on track which required a tow. It was the opportunity that Machavern needed to close the final gap on Merrill. On the restart, the pair of Mustangs raced through the tight, fast turns of the 1.53-mile circuit. With time ticking down, Machavern tried to pass Merrill on the uphill. His attempt was unsuccessful as he dropped two wheels off track, allowing Merrill to cross the stripe about a half a second before him.

“Thomas is good at making his car wide and big, and he really worked that traffic well,” Machavern explained. “The Stevens Miller Liqui-Moly Mustang was awesome all weekend, but Thomas just bested me on the last lap in qualifying and really the same thing happened at the end of the race. I think we had the fastest car at the end, we had some passing opportunities, but Thomas just knew how to make his car big.”
Using his NASCAR circle-track experience to his advantage, Lagasse wheeled his No. 92 SLR/Fields Racing/M1Racecars Chevrolet Camaro from a fifth-place start to a podium finish despite losing power steering late in the round.

“I’m exhausted after this race and ready for a nap,” Lagasse laughed. “To run this kind of a track without power steering was a little bit interesting. We had a really good race car, but lost some speed after the power steering went out. We had solid race and this track was a lot of fun.”

Championship-points leader Marc Miller also experienced some issues early on in the race after contact between his No. 40 Prefix Stevens-Miller Racing Dodge Challenger and the No. 25 BC Race Cars Chevrolet Camaro of Tony Ave sent Miller back to mid-field. Working through traffic, Miller managed to finish the race where he started, in fourth.

“We soldiered the No. 40 Prefix Doge Challenger back through the pack to finish fourth,” said Miller.  “We just didn't have the car to win today, but we secured a solid result with no damage before the important Detroit GP double-header next weekend. It was a huge effort by the Stevens-Miller Racing team and Prefix. Also as the only Dodge in the entire TA2 field, we had a great deal of fans visit us for the fan walk. It was great to meet everyone and see some old friends. Now it's time to head home to prepare for the next one.”

Missing the last round at Laguna Seca, defending TA2 champion Rafa Matos returned to the Lime Rock Park lineup. With major competition and limited passing areas, Matos was only able to make up two positions before the end of the race, slotting into fifth.

Doug Peterson won the Masters award in the TA2 class following a 10th-place finish in the No. 87 3Dimensional Services Group Ford Mustang. After weaving through traffic to take the win, Merrill received the Cool Shirt Cool Move of the race.

The TA2 powered by AEM drivers have a quick turn around before the next Round, traveling to Michigan for the Detroit Grand Prix May 31-June 2. For results, standings and timing and scoring, visit GoTransAm.com.